The ultimate guide to the treatment of melasma in Singapore You may be wondering what causes you to develop strange brown marks on your face and whether they can affect your overall health. My experience as an aesthetic doctor for more than 10 years allows me to share about Melasma Treatment in Singapore, the solution to your brown marks.

Melasma is a common skin pigmentation condition that appears as a brown to grey patches typically on the cheeks, forehead, nose and chin. It occurs predominantly in females with only 10% of males having this condition. Melasma, also known as chloasma, is common in females after pregnancy, giving rise to the term “mask of pregnancy”. 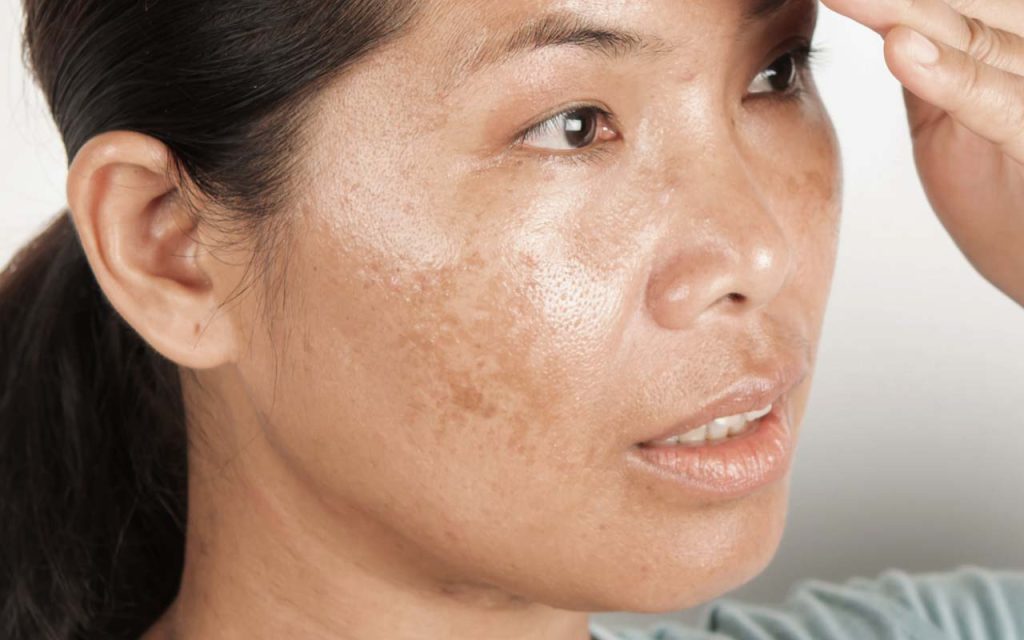 Can Vitamin D deficiency cause Melasma?

Currently, there are no conclusive results as to whether vitamin D deficiency causes Melasma. There are many factors that can contribute to the development of melasma, which make it a complex condition. Known factors include:

The factors mentioned above contribute to the excessive production of melanin. Some people can also inherit melasma from their parents.

What is the difference between Melasma and Hyperpigmentation?

Human skin colour ranges in variety from darkest brown/ black (skin type 5) to the lightest hues (skin type 1). This is the result of genetics, which is the product of the individual’s biological parents’ genetic makeup, and sun exposure.
The cells responsible for pigment production are referred to as ‘melanocytes’ and when they are stimulated, as in sun exposure, or damaged or unhealthy, they can produce an excess of melanin leading to hyperpigmentation.
Hyperpigmentation can take the form of small discrete freckles to the larger solar lentigo to large areas of patchy pigmentation.

In cases where the melanocytes are no longer active and capable of melanin production, a condition called ‘hypopigmentation’ ensues.

How often do patients with melasma get misdiagnosed with hyperpigmentation?

Misdiagnosis of melasma with hyperpigmentation can occur, but, in my experience, this does not happen often. If the history taken during the consultation is thorough, and the doctor is sufficiently experienced to recognise the pattern of pigmentation that is typical of melasma, then a correct diagnosis is often given.

The importance of a correct diagnosis of Melasma.

The initial consultation is most important as a correct diagnosis of melasma needs to be made. A detailed history taking is necessary as it will reveal the recurrent relapsing nature of melasma. The typical distribution pattern of Melasma needs to be recognised, and this in part will be dependent on the experience of your doctor. 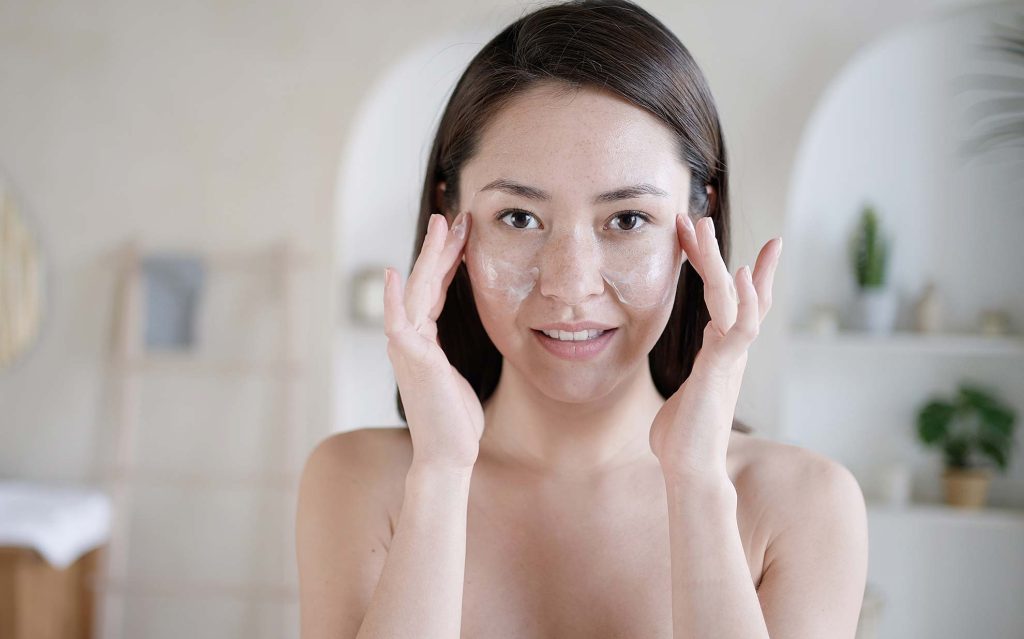 Topical creams
Topical creams such as Hydroquinone, Azelaic acid, Kojic acid, Retinoids and topical steroids can be used if melasma is not too severe. However, in order for the creams to work properly and prevent the melasma from recurring, the use of sunscreen is necessary.

Microdermabrasion
This is a procedure that removes the thick and uneven outer layer of your skin. There is no down time for this procedure, and your doctor usually prescribes you with a moisturiser or skincare products to prolong the result.

Chemical peel
This is a procedure that removes the outer layer of your skin by applying a chemical solution to your face. Within a few days, your facial skin will shed and grow a new layer of skin that is smoother and more even.

Medical Grade infusion of Vitamin C and or other whitening agents
This infusion will be done via one of iontophoresis, electrophoresis, or plasmaphoresis. Some clinics will also use devices like SilkPeel Dermalinfusion or HydraFacial to deliver these whitening agents.

Thulium laser
This category of laser utilises a 1927nm wavelength and includes the Korean BB laser, the Lutronic Lasemed, as well as the Clear & Brilliant Laser. This is a laser procedure to treat pore s and pigments by renewing damaged skin and stimulating the production of collagen. Depending on the laser strength, the downtime can vary from 0 to 7 days [6]. Results can be seen after 2 to 3 weeks.

Q-Switch laser
This is a laser treatment that treats ageing and pigmentation issues, including melasma, with little downtime. The laser energy breaks down the pigment into smaller pigments and is naturally cleared away by the body. Results can be seen within 3 to 4 weeks after treatment.

Pico Laser
This is a laser treatment that has many benefits, one of which is that it removes pigmentation in a non-ablative way. The difference between the Pico laser and Q-switch laser is that the pulse duration is much shorter than Q-switch. This means the risk of getting a hyperpigmentation from the laser is relatively smaller. The best results are achieved after 4 to 6 treatment sessions. Vascular Lasers: This category of lasers are useful in reducing the increased vascularity and increased VEGF activity in Melasma. In my practice the preferred choices are the Dual Yellow Laser and the Excel V laser.

What are the short/long term side effects from melasma treatment

The previous gold standard was hydroquinone 4% or Kligman formula . Most doctors are now using cysteamine cream because of the long term side effects of hydroquinone and especially the potential of carcinogenicity. It reduces pigment marks, brown spots, produces a uniform and light skin complexion, and can be used on any skin type.

Cysteamine cream works by reducing melanin in the skin. It is also an antioxidant and can protect against ionizing radiation. Cysteamine is found naturally in the body, especially in human milk. Finally, it is anticarcinogenic, meaning it reduces your risk of cancer, and antimutagenic.

Oral medication is typically in the form of tranexamic acid and oral sunblocks like crystal tomato, heliocare pure white radiance or a combination of vitamin C and glutathione.

Tranexamic acid gives results even in low doses (500mg daily) over short periods of time (8-12 weeks). They do not have much side effects associated with them and are a good therapeutic option when hydroquinone 4% or cysteamine cream is ineffective. Studies show that Transexamic acid does not increase thromboembolic risk, which is the risk of a blood clot dislodging itself and clogging up another blood vessel. However, make sure you let your doctor know what health conditions you have in case of contraindications.

These treatments include IPL, the various forms of pigment and vascular lasers. The globally known Q-switched laser toning has now been replaced by the newer Picosecond lasers, of which the notable ones would be Picosure, Picoway, PicoGenesis, Discovery Pico, and a host of other Korean made Pico lasers.

The main advantage of these pico lasers is their ability to break down the pigment onto much smaller particles, which makes it easier for the body to eliminate them. At the same time, the Picosecond technology means there is less collateral thermal damage to surrounding skin which means less risk of hyperpigmentation.

Vascular lasers are now used to treat melasma. Researchers have identified increased vascularity in melasma due to increased activity of vascular endothelial growth factor, a signal protein produced by cells that stimulate the formation of blood vessels (VEGF). In my practice, I would choose either the Dual Yellow Laser or the Excel V laser based on the patient skin type as well as the sensitivity of their skin.

Slyfirm is a unique bipolar non-insulated pulsed RF that has been shown to be effective in the treatment of melasma mainly due to its ability to strengthen the basement membrane as well as reducing the activity of VEGF. It also has an effect of stimulating the fibroblasts resulting in increased production of procollagen 1, which is known to minimise melanogenic factors.

Are there any downtimes for laser treatment of melasma?

Some common scabbing may occur after the treatment, which will disappear after 2-4 days.

You can continue your regular activity after this treatment. Expect skin redness that usually fades within an hour. Hives also may occur, but it can be treated using medication.

There is almost no downtime for this procedure. If you choose to do Pico laser treatment, you have to make sure that you avoid prolonged sun exposure for a week after the treatment to prevent hyperpigmentation from occurring.

It is usual for certain patients to experience discolouration on the existing pigmentation before it starts to wear off.

What are some lifestyle habits we can adopt to prevent getting melasma?

I understand that having melasma can ruin some people’s confidence. While it is a little complicated to treat, there are several things that you can do to minimise the risk of developing melasma:

Sunscreen plays a vital role in preventing melasma since a significant cause of melasma is sunlight. Use sunscreens that protect you from both UVA and UVB with SPF 30 or higher.

Do not forget to wear a hat when you are outside to avoid direct sunlight as it can cause hyperpigmentation and trigger melasma.

Harsh skincare can cause irritation and trigger melasma. Use products that will not give you a sting or burn sensation, especially if you have sensitive skin.

Melasma is not harmful and is generally treatable. There are also things that you can do to prevent melasma from developing on your skin, with various treatments that you can choose to treat melasma.

Before attempting to treat your melasma, make sure that you consult your doctor to know which treatments to do according to your medical history and skin condition.

I understand that treating melasma requires a lot of time and effort because it won’t go away from just a single treatment. Please take a note that you will be able to achieve the best result if you are consistent with the treatment.

Your journey to looking and feeling good starts here. Learn more about how this treatment can help you unlock the restoration and rejuvenation you need for your skin and body. Contact us to make an appointment.

Closed on Sundays and
Public Holidays